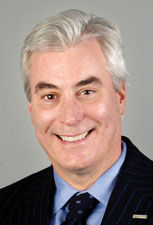 WASHINGTON – Greg Wingfield, President and CEO of Greater Richmond Partnership, has been named as a leader of the FDI Frontlines Coalition, a national organization focused on arming state, regional and local economic development organizations (EDOs) with the resources they need to attract more foreign direct investment (FDI).

“Global investment plays a critical role in Virginia’s economy, and Greg’s efforts through the Greater Richmond Partnership have made the Old Dominion a leader in attracting foreign investment,” said Nancy McLernon, president and CEO of the Organization for International Investment (OFII), a non-profit business association representing 170 of the world’s largest employers that is supporting the coalition.  “EDOs engage with global investors to create opportunities for their communities, fighting every day to improve the business climate in America.  At its essence, the FDI Frontlines Coalition is about helping EDOs attract more global investment, and we’re honored to have Greg help lead this initiative.”

With the support of OFII and its insourcing member companies, the FDI Frontlines Coalition will offer EDOs an opportunity to enhance their global investment IQ by providing research and business insight while also amplifying their voice on ways America can attract more foreign direct investment.

“Over my 20 years as CEO of the Greater Richmond Partnership, the region has attracted more than 180 companies and billions of dollars of investment based on long term lead development,” said Wingfield. “I’m honored to join the coalition’s steering committee to assist the rest of the nation in growing the investment of foreign companies in their communities.”

The FDI Frontlines Coalition was officially launched at the SelectUSA Investment Summit in Washington, DC on Monday, which brought President Obama, seven cabinet secretaries and three governors together with thousands of EDOs and foreign employers to focus on increasing foreign direct investment in America.

Virginia ranks 13th in the nation in the total number of jobs and 23rd in per capita jobs supported by foreign companies.  Nationally, these insourcing companies employ 5.8 million Americans, support an annual payroll of $456 billion, paying U.S. workers an average of $78,927 – more than 33 percent higher than the economy-wide average.  Insourcing companies also produce more than 21 percent of U.S. exports, providing $334 billion in American goods annually to customers around the world.

Created more than two decades ago, the Organization for International Investment (OFII) is a non-profit business association in Washington, D.C. representing the U.S. operations of many of the world’s leading global companies, which insource millions of American jobs.  OFII works to ensure the United States remains the top location for global investment.  As such, OFII advocates for fair, non-discriminatory treatment of foreign-based companies and promotes policies that will encourage them to establish U.S. operations, increase American employment, and boost U.S. economic growth.  For more information, please visit www.OFII.org.